The aim of the Forum is to bring about a change in Loe Pool from an algae dominated state to a clear freshwater lake with healthy populations of plants and fish. This requires reducing the quantity of phosphorus entering the lake. Phosphorus is focused upon because it is a key WFD and SSSI target and because of its significant role in lake rehabilitation.

The Environment Agency (EA) first sampled phosphorus concentrations at Loe Pool’s tributaries and outfall in 1995. Since then sampling has been conducted in 2003-2004, 2013-2014, and 2015-2016. This has enabled the EA to produce an average total Phosphorus concentration graph which shows change over time. 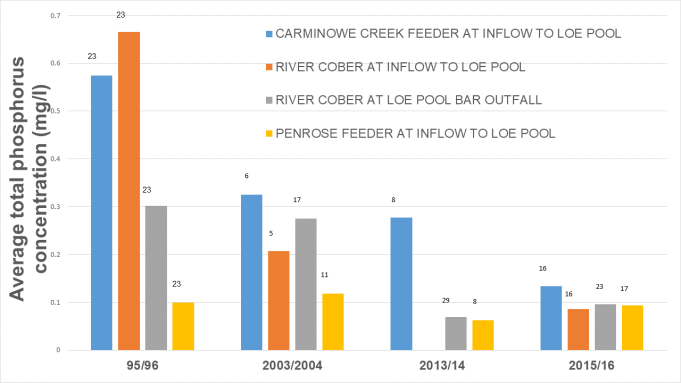 The graph shows the great progress which has been made in reducing phosphorus concentrations over the last 20 years.

Although the EA inform LPF that while the phosphorus inputs are reducing it will take years or decades for reductions in the rivers to be reflected in the Pool. 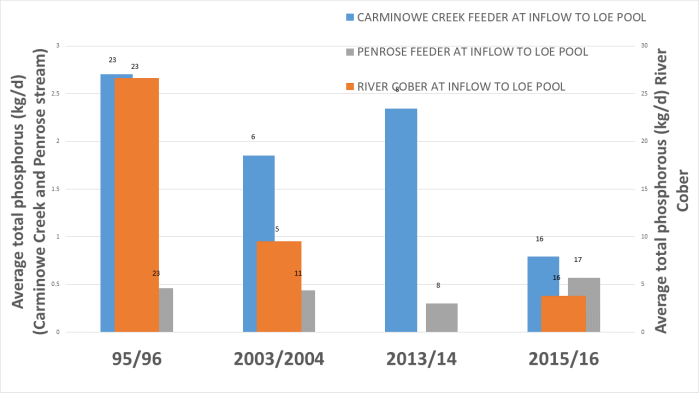 The Forum partners are very proud of this positive progress for environmental reasons but also because it demonstrates that the catchment based approach is working.

The full report on progress can be read here: 2017 Catchment Management Review and the 2027 LPF Plan