‘Understanding our habitat’s past is
the first step in creating thriving environments for the future.’

Loe Pool is Cornwall’s largest natural lake. The lake is also known as ‘Logh’ from the Cornish, meaning pool. It is a Site of Special Scientific Interest, which means it is an area that’s of particular interest to science due to the rare species of fauna or flora it contains, or because of the important geological or physiological features that lie within its boundaries. It is an area with high conservation value, and needs to be protected.

Loe Pool has been owned and managed by the Natural Trust since 1974. when the Penrose Estate was given to them by Lieutenant Commander Rogers.

The lake’s history so far
Loe Pool used to be brimming with underwater vegetation. However, from the mid-1970s up until 2006, summer algae blooms took over the lake, dominating the water and turning it a murky shade of green, shutting out the light and stripping the water of oxygen.

Around half of the nutrients leaking into Loe Pool come from sources that are easy to identify such as South West Water’s sewerage treatment works at Helston and Royal Navy Air Station (RNAS) Culdrose, and the rest come from scattered sources such as agriculture, domestic septic tanks and light industry in Helston.

We have made huge progress in reducing the excess of nutrients in the lake, particularly phosphate, with the help of South West Water. Thanks to this, there have been no algae blooms since 2006. 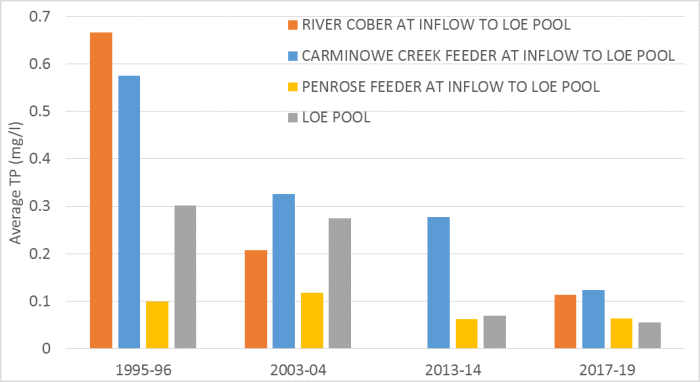 Special habitats, wildlife and their management

1 – Willow Carr: The Willow Carr at the Helston end of Loe Pool features a mosaic of reed beds, small shaded pools, large decaying willows, dense carr and open glades. An expanse of Grey Willow also provides an important nectar source for a wide range of insects in spring. In fact, the Cober valley contains the largest community of Grey Willow in West Cornwall

Because the Carr is so exposed, the ground flora has become well-developed, and we have a great diversity of wetland species, such as yellow iris, meadowsweet, and trifid bur-marigold (rare in Cornwall). The southern end of the carr is wetter and covered in common reed.

In 1946 a section of the Cober between Loe Marsh and Helston was turned into canals. While this draining hasn’t affected the plants significantly so far, it could mean that climate warming causes drier summers in the future, which may harm the flora in the wetlands.

2 – Loe Marsh: Loe Marsh is a reedy shoreline which encroaches on the water around the Cober outfall. It rises around 1 metre every 20 years. There has been a gradual spread of reed beds around the edge of the pool over the last 50 years due to grazing being reduced and a  rise in nutrient levels. 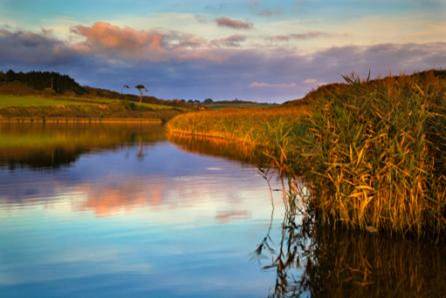 You can see some significant bird species such as reed warbler, sedge warbler and reed bunting in the willow carr and reed beds of Loe Pool. Reed bunting, which is on the RSPB Red List has been spotted here – its numbers have halved since 1996.

You’ll also find Cetti’s warbler, which is on the RSPB’s Amber List of species. It was barely present in Cornwall until the late 1970s, and now is only found in the Tamar Valley, Penrose,Gunwalloe and Marazion Marshes in Cornwall.

3 – Trout and Otters: You can see Loe Trout, which is unique to the area, here. The trout use the river for spawning, but are vulnerable to fishing in the area. The poor water quality and algal blooms of Loe Pool help boost other species, such as rudd and perch. Dredging the river can harm egg development in the gravels, yet, where water quality is good, Loe Trout spawn very successfully.

You will see otters along the Penrose stretch of the River Cober and around Loe Pool. However, in 1998, work to reduce the effects of flooding damaged their habitat. This work also created an informal path that is regularly used by dog walkers, and this further disturbs the habitat for otters and other wildlife.

4 – Woodlands: Woodlands have been important aesthetically and economically at Penrose for centuries. They provide renewable timber, fruit and fuel, and beauty and inspiration for owners and visitors. The woodlands and parkland trees have reflected changes over time and their long lifespan means they still provide glimpses of the past use and management of the land.