Loe Bar is a ridge of sand and shingle between Loe Pool and the Atlantic sea. It is a site of outstanding historical, geomorphological and conservation interest

‘Loe Bar’s habitat is unique in Cornwall, home to many rare species of plants, mosses, algae and insects. It’s also an important site over winter for nearly 80 species of birds and around 1,200 wildfowl.

How Loe Bar was formed

According to folklore, the ghost of Jan Tregeagle dropped a bag of sand across the mouth of the Cober to make the bar

We believe Loe Bar was formed during the last Ice Age, when the sea level was more than 100 metres lower than today. As the Earth warmed up, massive ice sheets that covered the land began to melt, dumping millions of tonnes of eroded materials that had been trapped in the ice.

As the ice continued to melt, sea levels began to rise and the waste sediment, now part of the sea, was gradually moved back towards the land.

We think that the River Cober was originally blocked as the result of a series of dramatic storms over a few winters. These would have thrown the rubble that had built up offshore into the mouth of the River Cober, beginning the formation of Loe Bar. This means it is likely that the bar is around 5,000 to 6,000 years old, formed when the sea level around Cornwall reached its present height.

Why is Loe Bar growing?

Loe Bar has changed over the centuries thanks to a process called longshore drift.

There is a strong south-easterly current that runs along the beach that links Porthleven to Gunwalloe that dumps shingle on the bar. However, as the tide goes out, it does not run in the opposite direction, meaning new sediment piles on to the bar. Winter storms and the enormous waves produced by Atlantic weather systems also have an impact, adding hundreds of tonnes of new sediment. Some storms are so strong they actually dump sediment completely over top of the bar, stabilising it even further.

As the bar became wider and higher, less fresh water filtered through into the sea.

The water level of Loe Pool would  rise and then suddenly, and spontaneously, break out.

This was often because winter storms blocked the original drainage opening between the bar and the sea, causing a backup of water and leading to flooding in the lower parts of Helston.

To solve this, the local community would  break through the bar to let water drain from the pool more quickly to avoid flooding.

Miners at nearby Castle Wary silver mine cut a tunnel through the rock at the northern end of the bar in 1790 to prevent their work area from flooding.

As the bar got wider, this channel became blocked again, until Captain Rogers enlarged it in 1887. This created a flow of water from the lake that kept the tunnel fairly free-flowing.

Channels were bulldozed through the bar by South West Water in 1979 and 1984.

Finally, in 1986 the Water Authority added a concrete lining to improve flow through the channel. They also increased the tunnel’s length by 100 metres and added a sluice gate to control the water flow from the pool. 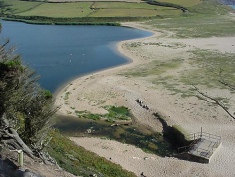 Over time the bar has been shaped by frequent breaks, with natural, and man-made, channels made across the narrowest and weakest section. You can see an indent on the inner side of the bar where the channel was cut in 1984. Many of the irregularities you see on the surface are from sediment spread caused by large storm waves.

There is no longer any cutting on Loe Bar, allowing waves and wind to help it grow naturally. This increases the shingle build up, and the clogging from huge quantities of mining waste, means that less water is lost through the bar, and all the excess water from Loe Pool now flows through the drainage opening, known as an adit.

Coastlines are constantly changing as a result of the sea’s actions. This will increase in the future because of climate warming and sea level rise. The trust has recognised we must accept the shifting nature of coastlines and  limit the coastal defence we carry out. This philosophy underpins the National Trusts Shifting Shores Policy, explained here in a video narrated by Kate Humble.

Coastal erosion can have both permanent and temporary effects. While footpaths can be replaced, accepting the dynamic nature of the coast means we must accept land our care will change with time. This deliberate yielding of land is called ‘managed retreat’. While this may appear contrary to ‘permanent preservation’, we have to accept that we cannot protect everything forever.