Loe Pool has long been famous amongst anglers and conservationist for its wild trout. The population is genetically unique because over the centuries, as Loe Bar formed, the brown trout became separated from the sea and other trout populations. There is not all that much historical data on the fish populations in Loe Pool, although we think that it’s mainly been trout, eel and possibly sticklebacks up until the last century. In 1943 Rudd, which is a type of coarse fish, was introduced to the Pool. This was followed by Perch in 1994/1995 and Roach in 2006. Rudd is known to have originated from Coronation Lake but it’s not clear how the Perch and Roach got into the Pool. It’s thought that the Roach and Perch spawn in Loe Pool and spend their first year in the lake, before migrating to live in the Lower Cober. If you have walked the Lower sections of the Cober you may have even spotted these dense shoals of Roach. While there is a sparse amount of quantitative historical data on fish populations the National Trust gathers some really interesting information from local anglers. As part of the anglers permit the National Trust issue they are asked to report back on how long they spend fishing and what they catch. We’ve looked back at this data and in the 1970s anglers were catching 3 to 5 trout an hour; by the 1990s it took 4 or 5 hours to catch a single trout, and the fall in catch rate has continued.  In 2003-2008 it took almost 9 hours on average to catch a trout in Loe Pool!

It’s now been 10 years since we last conducted a fish survey in Loe Pool! Over this period water quality has dramatically improved; nutrient levels in the water are now 75% lower than they were and, consequently, the algal blooms are less of a nuisance. So it’s high time we found out how the fish population have responded. In particular we wanted to know how the native trout have reacted to the cleaner water and also how the numbers of those recently arrived coarse fish had changed. In 2014 the National Trust commissioned ECON Ecological Consultants Ltd, with funding from Natural England’s Conservation Enhancement Scheme, to carry out electro-fishing in both the lake and the River Cober. 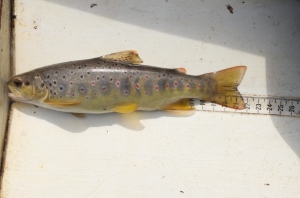 Trout caught in Cober during survey

Sadly ECON did not actually catch any brown trout in the lake during their survey. However, the consultants do think that some large mature fish are still present in the deeper open waters. It’s just that these fish are far too wily to be caught. The fish consultants did find good numbers of small young trout in the River Cober around Helston. Excitingly the density of brown trout in the Lower Cober was greater in 2014 than 1998. This could be a sign that the fish population are expanding or, as ECON believe, just that the trout remain in the river. These fish are all part of the same population and could move into the lake at any time. It just seems they prefer to take refuge in the river for now. So it’s good to know that our local, native, genetically isolated brown trout population has survived the thick algal blooms present in Loe Pool every summer through the 1980s and 1990s. It’s clear though that the elevated nutrient levels (eutrophication) have had a huge impact on the trout and that they are still not thriving in the lake itself yet.

Roach caught in Cober during survey

With regard to the other species, it’s the Roach which are now dominant, while the Perch are still present in reasonably high numbers, the Rudd population is small. This is because Roach are particularly efficient at selectively predating on large zooplankton in turbid water, whereas trout need clear water in order to see their prey. The future of the lake’s trout relies on a healthy macrophyte (aquatic plants) community to oxygenate the water. However, macrophytes rely on sufficient light to get rooted in the sediment and this is still a challenge because of the turbidity from diffuse nutrient and sediment inputs. It’s hoped that as we get closer to the water quality threshold a climatic factor, such as a particularly warm spring, could trigger germination from the macrophyte seedbank and in doing so enable the trout to populate the lake once again.

7 thoughts on “Surveying the fish population in Loe Pool”