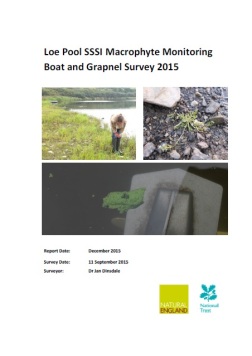 This report details the results of the 2015 Loe Pool boat and grapnel survey, part on an ongoing programme of macrophyte monitoring undertaken on this lake since 1999.

The boat and grapnel survey method employed is semi-quantitative and uses a rake, or grapnel, thrown from a boat to retrieve plant material at set points along 14 fixed-location transects across Loe Pool. The survey methodology was developed by Nick Stewart and first undertaken in 1999; it has been repeated 10 times over the past 16 years. In 2015 this work was funded by Natural England’s Conservation Enhancement Scheme.

The 2015 survey found rooted or floating macrophytes in just two of the 60 sample stations. Only the introduced non-native water lily Nymphaea alba was recorded within stations; 58 of the 60 sample stations were unvegetated. There continues to be a paucity of rooted macrophytes in Loe Pool. There has been little overall change to the deep-water macrophyte beds within Loe Pool since 1999, despite dramatic improvements in the lake’s water quality since 2004 (Dinsdale, 2009).

Within the monitored period, an extensive population of Nuttall’s Waterweed Elodea nuttalli was present from 1999 until 2007 and small amounts of Perfoliate Pondweed Potamogeton perfoliatus and the stonewort Nitella flexilis were recorded in 2003. These species have not been recorded at Loe Pool since 2007, neither as part of this ongoing boat and grapnel survey method, nor during the more extensive scuba dive survey undertaken in 2012 (Dinsdale, 2012).

The non-native macro-algae Water Net Hydrodictyon reticulatum was first recorded in Loe Pool in 1989 and was prolific over large areas of the lake each year from 1993-2006 (see Dinsdale, 2009). Water Net has only been recorded once in Loe Pool over the 8 years period since 2007: small quantities were present in the northern half of the lake during 2013 survey. Water Net was not recorded during this 2015 survey, however, significant quantities of filamentous algae, both of the Cladophora glomerata type and an encrusting filamentous algae (cf Cladophora aegagropila) were present on the stones on the lake floor across Carminowe Creek, the eastern arm of the lake. In addition, small flocculations of the blue-green algae genus Microcystis were present in both Carminowe Creek and the Penrose Inlet.

Successful lake rehabilitation from a eutrophic algal dominated condition to clear water relies heavily upon the re-establishment of submerged vegetation. The Loe Pool Forum is taking a collaborative multiagency approach to addressing external sources of nutrients and sediment to the Lake. Alongside this important and successful catchment approach, in-lake management recommendations are proposed to help ‘kick-start’ the growth of macrophytes within Loe Pool.